Shaking like a fish just fresh out of water, I was turned from a professional cake baker to a professional beggar in an instant. Yea, I was begging for my life. The gun was in my face. In what seemed like hours of a never-ending drama, I was staring down the dark barrel. My heart pounded in my ears, and rivers of sweat streamed down my face.

These hungry-looking, but dangerous boys barged into my house in the middle of the night. And boy, my heart skipped many times in one second. From the house entrance, I could hear noises that seem like a saw was cutting through my window burglary. Something told me not to wake my kids up, because I knew they might panic and screw things up. On the brighter side, my wife was not at home.

"Jesus!", I exclaimed. Tonight is going to be one hell of an experience. I mustered courage and came out of my room. And that was it, all I could remember was that something was touching my head from the back.

"Don't move!", said a voice behind my ears. I later came to realize that it was a local pistol that was touching the back of my head. I nearly fainted! And before I knew what was happening, like I said earlier, the gun was in my face. For God's sake, the Iron door at the entrance of my sitting room was properly locked, and my windows have a very strong iron burglary. So how did these criminals get into the premises?

They were four in number. The other two turned my house upside down while searching for what I don't know, while the last two stood at my opposite sides, with one pointing a gun at my head.

I thought this was going to be my last day on earth. Not until one of the three came back to ask me, "Bros, any food in this house?" And boom, my mind went to the cake I baked earlier that night for my kids to take to school the next day. I didn't know how to tell them that there was no cooked food in the house. The only things in my fridge were the cake, a small loaf of bread for kids' breakfast, a Rosa margarine, and two raw eggs. They seemed really hungry, and I feared they might kill me if I say there's no food.

Still shaking and muttering some prayers in my heart and head, I led them to my fridge where I kept the cake only to find the fridge door open. "Oh! so these animals have searched this fridge before", I reasoned. To my utmost surprise, the cake and bread I kept for my kids had already been eaten!

Now it dawned on me that trouble was looming.  I was waiting to restock my fridge and buy foodstuff the next day. I didn't even have cassava flour, or what Nigerians call 'Garri'. So I was left with an only choice: Bake another cake.

How can I bake a cake at gun point? Do these guys even have a conscience at all? Well, I took the last cup of flour remaining in my custard bucket, and quickly brought out my basket of baking ingredients from my kitchen shelf which contained granulated sugar, a sachet of powdered milk, a small portion of baking powder and a tiny bottle of vanilla flavor syrup. So in total, all I had was:

Quickly, I brought out my sieve and began sifting my flour for fine texture. Just as I broke my eggs and began whisking it, I remembered something painful. There was no cooking gas to power my oven! What kind of frustration is this? The frustration took its toll on me that I forgot to whisk the eggs properly (until it becomes foamy).

But then I remembered Madam kay saying something in one of her live events on Facebook about baking without an oven. With lightning speed, I pulled out my kerosene stove, my medium sized aluminum stew pot, and a metal frame with 'legs' which I used for smoking fish.

The idea is to put the pot on the lighted stove, while using the metal frame as a stand to place the baking pan. My pot was reasonably deep so the lid covered properly after  placing the cake inside.

After sorting out my stove and pot, I carefully greased my baking pan with margarine to avoid the cake from sticking to the pan after baking.

Just as I stretched my arms to relax a little bit, my eyes moved away from the greasing pan and locked with the eyes of the criminal who pointed a gun at me earlier on.

"Bros, we can't wait o.. we don dey go", he stuttered. "Keep that one for your children when they wake up". I carefully tiptoed to the front door and noticed they had all gone. Without noticing the damaged windows and broken pieces of glass on my veranda floor, I dashed into my room to dial the police. Alas, they took my phone with them!

Anyway, I can always make call with my neighbor's phone later in the morning. What was important to me at that point in time was my children's food. I thanked God that they didn't inflict a scar or scratch on me. Then I went to my kids' room to check if they were alright, and behold, they were snoring as if nothing happened that night. So I went back into the kitchen and continued with my baking.

A Brief Story About Me

You see, as a loving father, I'd rather remain awake without sleep than have my children go to school without breakfast. Or even worse, have nothing in their lunch box while in school! I didn't want them to miss their mother so much. I don't want them to say, "If mum was around, we wouldn't have gone to school hungry". They are my world, you know.

Phew.. where did I stop? I looked at my poorly whisked eggs and beat it properly this time. Measured around 300g of margarine and put into a separate bowl. Mixed all the dry ingredients together, that is, my flour, sachet of powdered milk and baking powder. Gradually poured my dry ingredients, granulated sugar and margarine into the egg 'foam' and stirred for five to six minutes in clockwise motion. The vanilla syrup was finally added with a pinch of salt. And lastly, I added a little amount of water, and mixed the cake batter again for about three minutes.

Preheating of my pot wasn't much of a big deal. I put the metal frame inside the pot and put some water and oil mixture at the base of the pot, so the pot won't get charred completely. After lighting my stove, I modulated the fire to give medium heat so my cake doesn't come out very hard.

Boom.. cake batter on point. I carefully poured all the cake batter into the baking pan I greased earlier. Lowered the pan into the hot pot, on top of the metal frame stand, and covered the pot with its lid. At this point, I was feeling tired and sleepy, so I set my alarm to wake me up in the next 75 minutes. I can't remember when I dozed off completely on one of the chairs on the dining table. Can you relate? Lol...

Well, being a very sensitive person who doesn't sleep carelessly, I woke up before my alarm clock could ring. I perceived the sweet cake aroma and woke up to check on it. You know... when the aroma of the cake fills the air, it's a sign that you should check on it. Did my check by passing a knife through it, but I noticed some more heating needed to be done.

Again, the water/oil mixture at the base of the pot was drying up, so I added some small amount of water and went back to take a nap. I can't remember exactly how many minutes it was from taking a nap to waking up. But the cake was completely done at exactly 2.03 A.M that morning. I quickly put out the fire, and opened the lid of the pot. After some minutes, I quickly transferred the cake to my wife's favorite steel tray, drank a cup of water and went back to bed.

Woke up at around 6:00 A.M in the morning, went to my neighbor's house and narrated all that happened. He followed me back to the house and saw all the damage that was done, while thanking God with me that no life was lost. I intentionally didn't want to tell my wife about it, because the shock might affect her health negatively. I don't like seeing my wife depressed and sad. While I was preparing to take my children to school, bathing them, getting them dressed up and all, my neighbor also offered me his second phone to use for the main time.

Woke up at around 6:00 A.M in the morning, went to my neighbor's house and narrated all that happened. He followed me back to the house and saw all the damage that was done, while thanking God with me that no life was lost. I intentionally didn't want to tell my wife about it, because the shock might affect her health negatively. I don't like seeing my wife depressed and sad. While I was quickly preparing to take my children to school, my neighbor also offered me his second phone to use for the main time.

This was the aftermath of the cake I baked without an oven in the picture below:

Cake Without Sugar For Weight Watchers

But first, if you are interested, answer this short question survey below:

11 days into the training 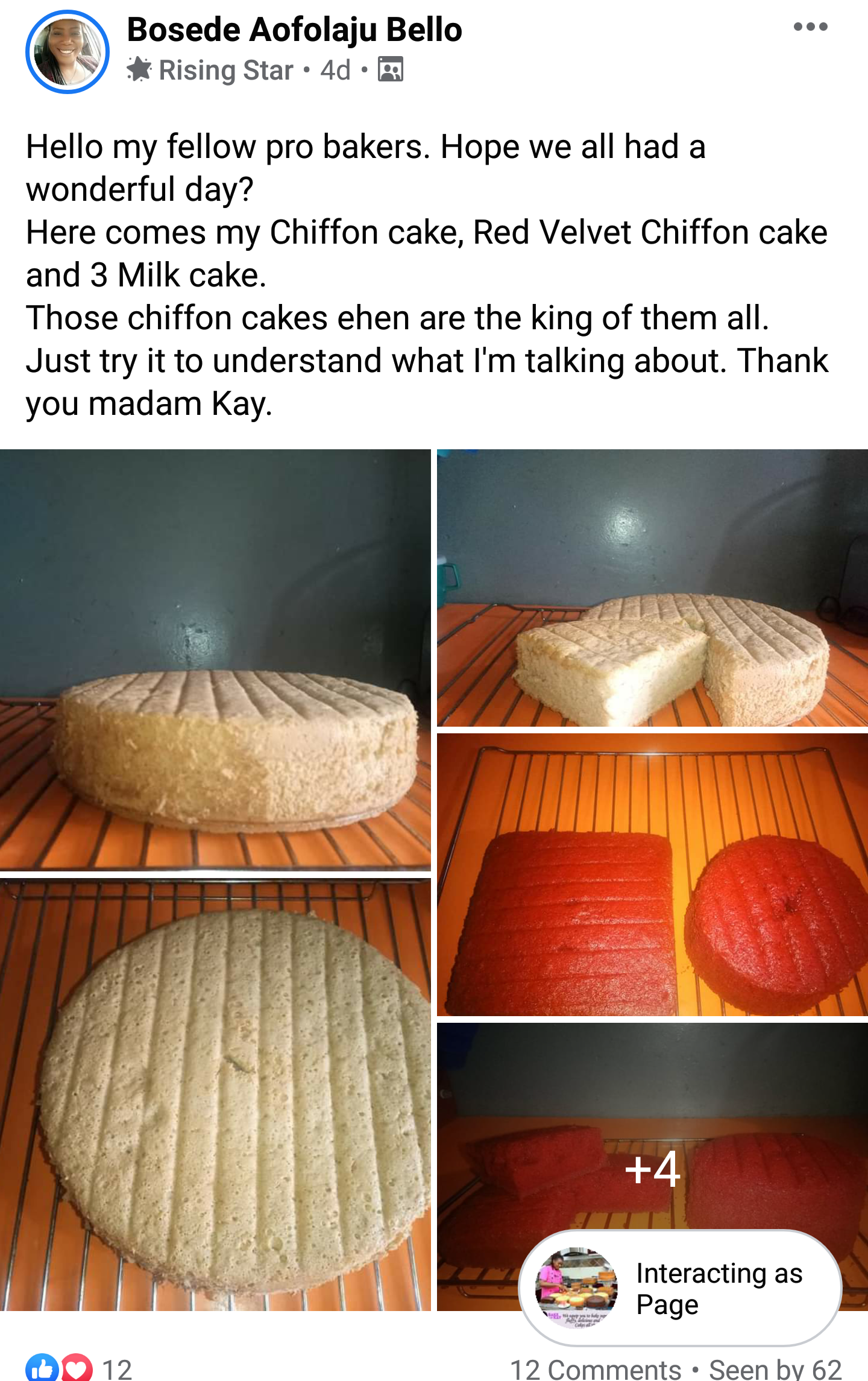 Chiffon cake from a new member 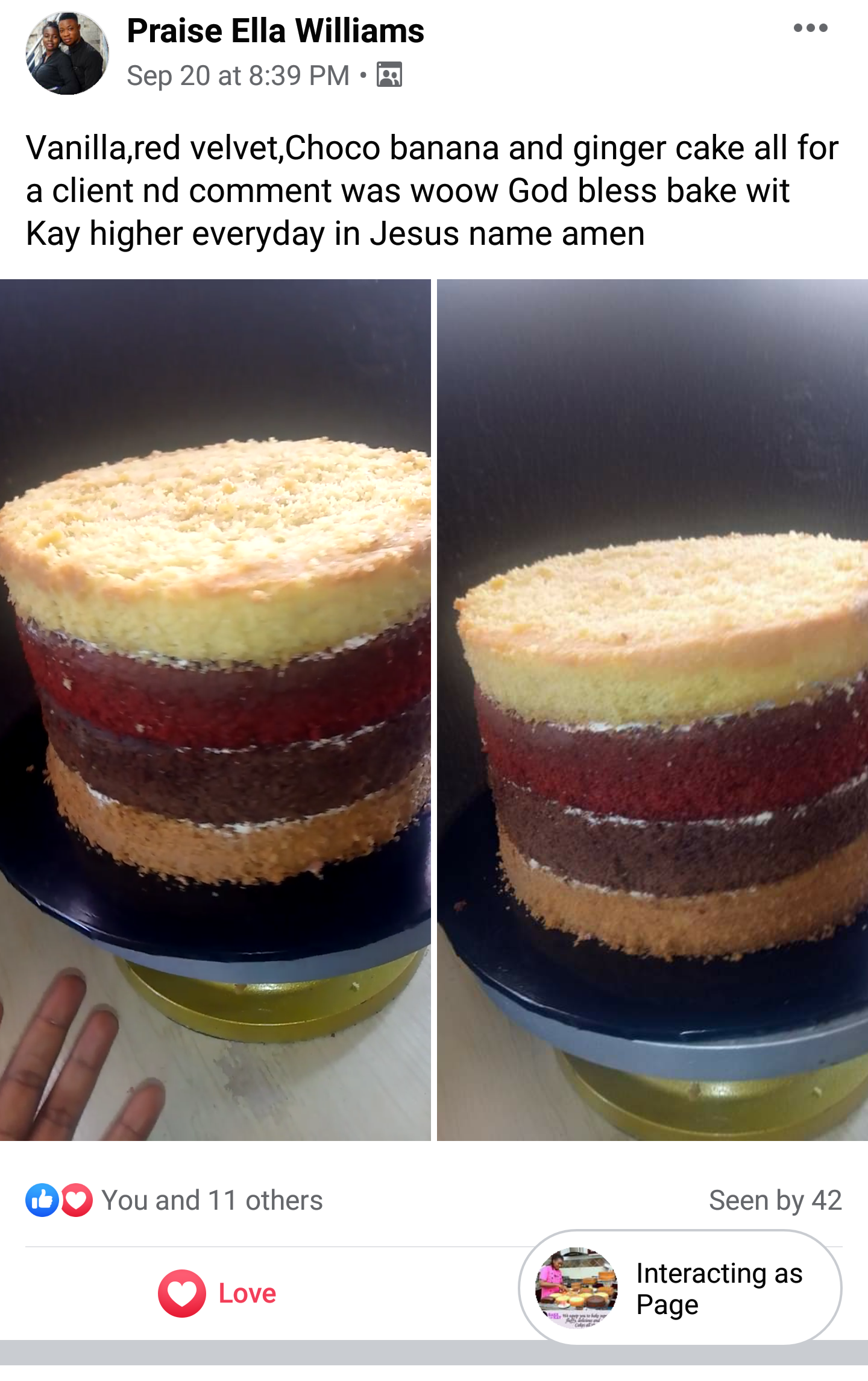 Tower of vanilla and choco

Disclaimer: This website is not in any way endorsed by, or affiliated with Facebook or Google. Any feature that makes it look like an affiliate of the afore-mentioned companies is purely coincidental. Thanks.